Two Offset Both Resolves to _IMAGE_DATA_DIRECTORY

This is the question of the day.

To write custom shellcode, break free from tools, and do more.

One way of achieving that is to dynamically resolve symbols from kernel32.dll. And to do that, I have to get reference to _IMAGE_DATA_DIRECTORY structure, step by step.

One of the very first step is to resolve the address of the _IMAGE_NT_HEADERS.

Interestingly, two offsets can both do the same thing.

Then I dumped the _IMAGE_DOS_HEADER.

The difference is the value after colon.

This is kind of embarrassing, since I haven't thought about the process carefully. Or, it's indeed a deviation from dt command and the actual operation that the code does.

The code for resolving the _IMAGE_DATA_DIRECTORY is as follows:

Then, the first line.

This can be confirmed by single stepping through the code.

Then, the second line.

And it can be confirmed with dt.

And last line of code.

It gets the virtual memory address (VMA) of _IMAGE_DATA_DIRECROTY by adding the base address to the RVA above.

If I do a dt command on the VMA, I got

which indicates there's no offset from base address anymore, I am right at the data directory (correct me if I'm wrong on this).

Do a dd and check if I can read that address.

I can, which indicates a valid memory address.

And from now on, I can retrieve the fields in the data directory by adding the offsets according to this post.

And look at this. It's confirmed that I'm accessing the _IMAGE_DATA_DIRECROTY since the value match. 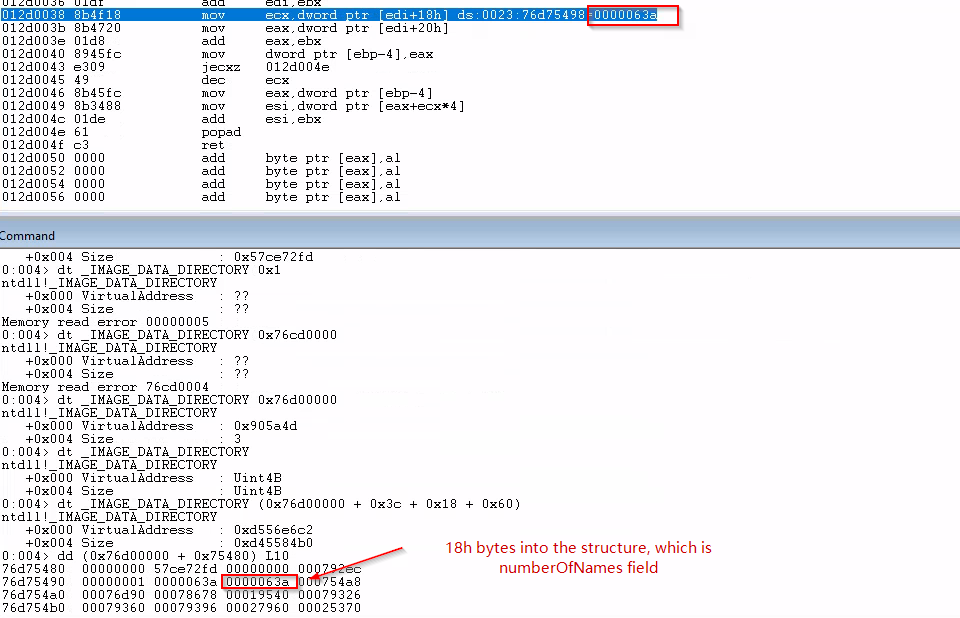 I think I was wrong about the conversion behind the scene if I use 0x3c to dump the _IMAGE_DATA_DIRECROTY structure using dt command. There is no conversion at all. Using 0x3c is simply wrong.

dt command will dump any symbol accurately only with a correct starting vma. As the next picture shows, it can resolve the symbol even without an address, it's just the two fields are not calculated.

That concludes this question. There's some misunderstanding about the dt command. The most reliable way is to debug through the code and see how things work.